I’ve written before about the best “bang for your buck” strength exercises and the rationale for their addition into your well-rounded program. The list was a who’s who of prominent bilateral core (primary) lifts with the most transfer across disciplines, sports, and life in general. You might be surprised that even I admit that the list was incomplete.

By design, it was incomplete. The list of low-risk/ high-reward exercises and lifts that can safely and effectively be added into your program yields a list too long for anyone to tackle in a 4-week cycle. Honestly, why would you? High levels of training stimulus variety and fluctuation have never made anyone better at anything specific. Besides. a nice round even number of 4 solid exercises makes for a better article.
The new culture of lifting has placed a greater premium on these big core lifts like the squat and deadlift. While that’s a refreshing change of pace from the good ol’ days of glamour muscles and the current state of affairs of functional training, it leaves a lot to be desired from a postural perspective. Anyone that has complained about their tight hip flexors inherently understands this, even if they won’t admit it or don’t completely realize the root cause. Long story short, America has forgotten about the auxiliary lift: the pre-habilitative/ hypertrophic exercises programmed after you’ve pre-fatigued yourself on the sexy lifts.
Which finally brings us to the best lift not sexy enough to have made the list: the Hip Thrust.

The Hip Thrust packs incredible value into a small neat package. Why this exercise? Glute development is an important part of complete athlete training. Your glutes are involved in explosive hip extension that comes with sprinting, jumping, rotation, and throwing. Your gluteus maximus, along with deep stabilizing musculature (gluteus minimus, gluteus medius, etc) posteriorly stabilize your pelvis. Your glutes are both a gas pedal and a brake pedal. For all of the importance of the glutes in performance enhancement and injury prevention, they are typically woefully underdeveloped. The Hip Thrust changes things. Here’s why: 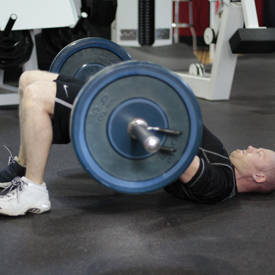 It’s definitely not as sexy as squatting with chains and you’re definitely not going to win any cool points whipping these out at a public gym. And yes… it feels a little embarrassing due to its resemblance to some…  other recreational activities. Cast all of that out of your mind because bolstering your injury defenses and enhancing performance simultaneously is about as cool as it gets. For all of the benefits the Hip Thrust brings to the table, it’s shocking how little you see it in action.
Maybe it’s because Jane Fonda got there first.